The Boxer is a medium-sized, square-built dog.   The Boxer ranges from 21 inches high at the shoulder in a smaller female and up to 25 inches or taller in a large male.  Adult weight may reach 65-80 pounds in the male with females about 10-15 pounds less.   Developed to serve as guard, working, and companion dog, the Boxer combines strength and agility with elegance and style.   The boxer has a keen sense of hearing which makes him an instinctive guard dog, always alert. He has good judgment and an uncanny sense of distinguishing between friend and intruder.  One of the delightful qualities that sets the Boxer apart is the unique mobility of his expressive face.  The skin furrowing of the forehead, the dark soulful eyes, and at times almost human attempts to converse, make his replacement by another breed difficult for one who has owned a Boxer. He mimics the mood of his master and can spend hours quietly lying at his feet.   His intelligence and loyal affection makes him a highly desirable companion. 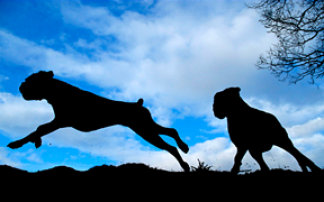 "The Chase" Photography by:
Patrick McArdle

Friends of
The Boxer Rescue

The well-conditioned middleweight athlete of dogdom, the Boxer is a powerful dog with an intelligent and alert expression. While they are instinctive guardians, the Boxer loves to be with his people. This personality has allowed them to succeed as couriers during war time and as seeing-eye dogs for the blind. Appearing in both fawn, brindle & white colors, the Boxer currently ranks as one of the most popular dogs in the United States.
A Look Back
The Boxers historical background begins in Germany. In the 19th century, Boxers were used to run down and hold large game such as wild boar and bison until the hunter could arrive. The breed is known for standing up on its hind legs and batting at its opponent, appearing to box with its front paws. Imported to America after World War I, they began to grow in popularity in the late 1930s.
Right Breed for You?
One of the breeds most notable characteristics is its desire for human affection. They are patient and spirited with children, but also protective, making them a popular choice for families. The Boxer requires little grooming, but needs daily exercise. 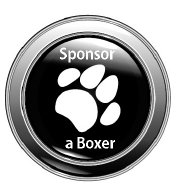